Home › Member Profiles › Jo Matthews – We can and we will 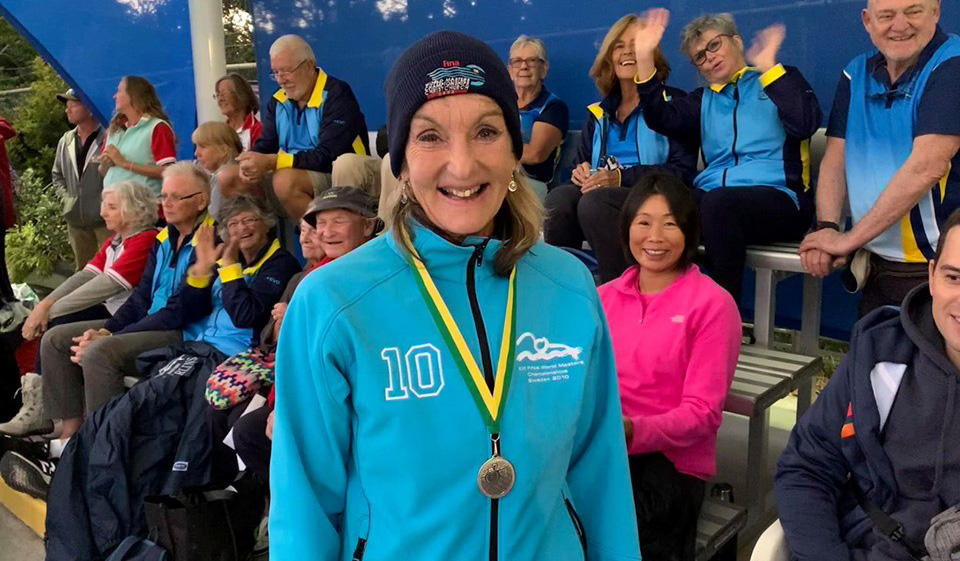 Jo Matthews – We can and we will

When I was 14, I went along to the local swimming club and asked if I could join. They were a bit surprised due to my age and that I was a virtual non-swimmer. My real reason for going was to meet boys! They set me a challenge of being in the top squad by Christmas, which was only 3 months away. That’s when I knew I loved a challenge and much to their surprise, I made it. After swimming for a couple of years, I gave it up to do other sports.

It is like a drug; I don’t feel like I have achieved in the day if I haven’t taken part in some sort of swimming. I hate it if I must miss a session due to illness.

I joined at 37 years of age, after a chance race against Mike Fibbins who was ranked 5th in the World for the 50m freestyle. He was the one that told me about Masters Swimming and strongly suggested I join a club.

In 2005, winning a silver medal in the 200m Butterfly at the World Masters Games in Edmonton Canada.

I swim six times a week, 4 times at the NAC with Jan Croft and twice a week at the Good Shepherd Pool with Brian Stehr.

Having short term and long-term goals and inspirational sports men and women.

Yes, in 2012 I was diagnosed with Lymphoma and was out the water for 18 months. Then last year I broke my arm and had to swim and compete one armed for 6 months.

I’m looking forward to the Nationals and States next year when I move into the 65-69 age group.

Other interesting facts about you?

I’m President of the Noosa Masters Swimming club. I have two Grandchildren, Lily who is 5 and Grace who is 2, and a Shih Tzu/Maltese Cross female dog called Charlie and a female tabby cat called Diana. I am an ex-Principal of a High School and I am still involved in teaching and tutoring, as well as running an Airbnb business.

Don’t give up, failures and obstacles make you stronger. ‘We can and we will.’

Do it! It is great fun, you meet some amazing people and you will surprise yourself, in what you can achieve.