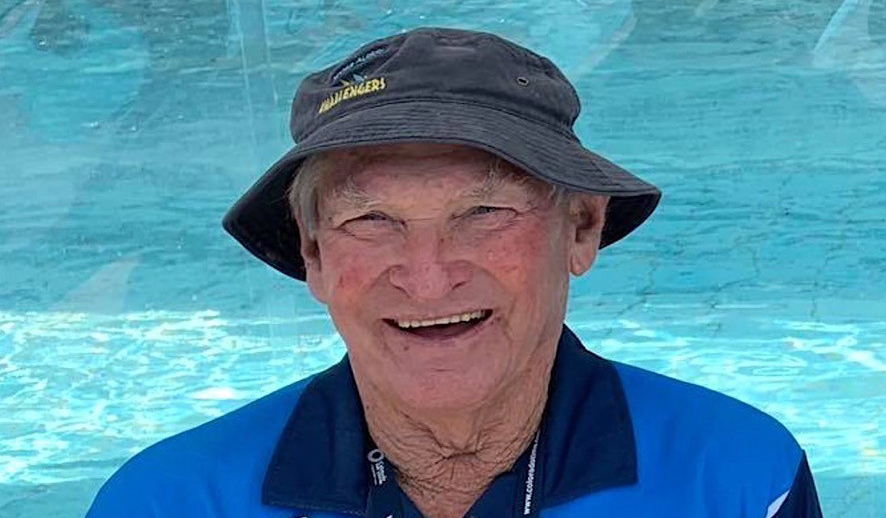 Bob at the pool
Posted on Wednesday 16th October, 2019

Experiencing life for nine decades means that one has seen and experienced a lot during one’s lifetime.

We’re all here today to celebrate with, and honour, someone who has inspired us … particularly through his swimming achievements … Bob McCausland.

A couple of other remarkable performances worth mentioning …

In spite of his 90 years Bob can still teach a 20 year old how to be young!  Although, the other day he told me that every night he’s been getting down on his knees and praying to reach 90 … but then had to pray to be able to get back up again!!

He also told me he had tried to sell his car with 168,000km on the clock, but no luck. So I said – “why don’t you do what everyone else does and turn the odometer back?”  When I asked him a couple of weeks later if he’d sold the car, he replied “Why would I sell a car with only 6,000k on the clock?”

Bob, you’ve gathered a lifetime of memories. May this birthday be full of new fun and surprises. Congratulations from all of us, on reaching this amazing milestone!

A toast to Bob by Tony Frost

I remember Bob joining us 18 years ago (1991) when we were a fledgling club of about 20 members, most of us naive in the “world of masters swimming” especially aerobics. Bob had moved down from Mackay where the aerobics swim program included 3 & 5 kilometre swims – that is 100 laps of a 50m pool or 200 continuous laps of a 25m pool.

Bob got us going at Noosa. By early 2003 I had completed my 1 million metres swim. He was always willing to assist others by being a timekeeper. Just a phone call and he was there.

His own swim feats were amazing. I remember him coming to a short course meet in Brisbane in his mid seventies, and recording 17 seconds for 25m freestyle!

Bob has always been a great member of our Noosa Masters Swim Club and a champion bloke.

These notes are from my memories of knowing Bob for some 30 years.

Born in Murwillumbah, NSW.   Raised and schooled there.  Also swam for the local swimming club in the ‘old’ pool.   I believe this no longer exists and has been replaced by a new complex on same site.

He trained as a carpenter after school and married in the united church in the main street.

His family name is mentioned in the town’s museum as one of the early pioneers in the area, involved in the timber industry.

Bob was living in Mackay when I first moved there in 1980.   I first met him as my milkman delivering to homes in South Mackay in the mid-eighties.   I think he worked as a carpenter/builder when he first moved to Mackay.

I got to know Bob well after complaining to him of my lack of fitness, due to the many hours I spent in my truck at the time.   He suggested I take up swimming to help and in 1988 he persuaded me to join the Mackay Masters Swimming Club of which I think he was a founding member in 1983.

One of the best memories I have of Bob is his tenacity to be good at swimming from 1991.

We decided to take up the USMS ‘February’ challenge (that of course is their mid-winter) of swimming 5,000 yards or metres in one swim. He arranged for Olga to time keep us swimming the distance alongside each other in the Memorial Pool in Mackay late in the afternoon (being summer needed it a bit cooler) and we set of to swim 5 km of breaststroke, as that is my favourite.

In about the first kilometre I managed to get 100 metres ahead of Bob so we were lapping together. From then on he would not let me get away, no matter how hard I tried, doggedly sticking to my pace even though I am 14 years younger!

One of the things I admire about Bob is his dedication to the Masters Swimming Aerobic/Endurance program, and how he has used it and is still using it to keep on swimming.