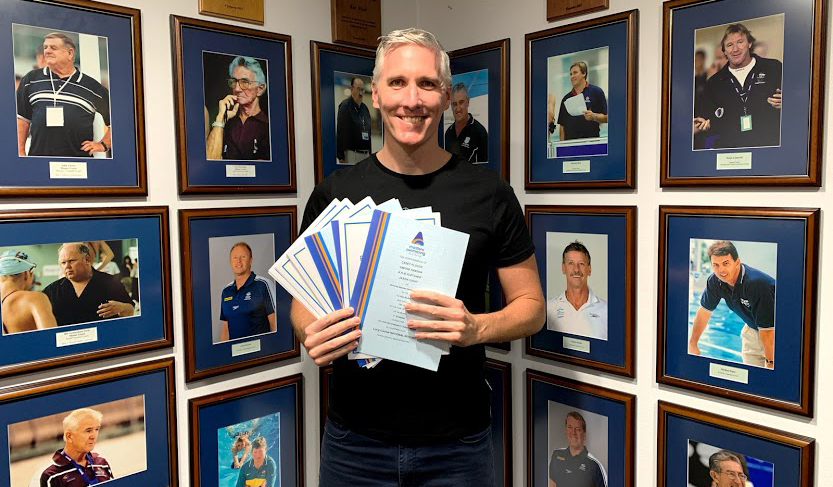 My parents, you can blame them. They were both swimmers and that’s how they met. 4 kids later, we were all dragged to the pool. I remember my first few sessions at the old Melbourne Vic Centre pool before it was demolished in the late 90’s.

The rewards. You push yourself through hours of training, for those few moments of satisfaction at the end of your race. The travelling. I combine my training in with the next competition that is coming up so I can make a holiday of it at the same time. It makes the training more worthwhile, and the holiday even greater after you are on a high from your achievements from the pool.

I joined Masters swimming in 2010 with River City Masters. A friend told me about the squad and that I should come along. I’ve been there ever since.

It would have to be at the 2014 World Masters Championships in Montreal. It was my first international meet for Masters and I managed to win the 100 Fs, 50 Breaststroke, 3rd in the 200 IM, 5th in the 50 Fly and River City managed to place 2nd in both the mixed relays. It was such a great meet and the 2 week holiday in New York and LA finished it off nicely.

It would have to be the 100 Freestyle. It’s what I mainly train for in training, but I don’t mind getting up and racing the 50 Breaststroke and 200 IM for a bit of fun.

I only swim 1 hour sessions, and attend 3-5 times a week. I train at Somerville House Aquatics Centre.

Not to be disappointed. I train, leading into my competitions, making sure I’ve done everything I can knowing I’m ready to race. On race day, I make sure I leave the pool with no regrets.  Also, I like food a lot. So, I have to keep somewhat fit.

Yes. Leading into World Masters Budapest 2017. Half way through preparation, my body had other ideas sending me to Chiropractors, Massage therapists and Doctors. I had minimal movement and my training become non-existent. I still competed on what training I had and won the 200 IM with a PB, QLD, AUS record and an All-time top 10 ranking. Don’t always listen to your body on race day.

Unfortunately, nothing is on the books. I had plans to compete at the National SC Champs in Sydney this year until they were cancelled both times due to COVID. I will be preparing for the next Nationals or World Champs once they get the green light. I’m presently maintaining contact with the water until the next plane ticket is booked.

I come from a family of 6. Four children who all swam and 6 years apart from each other. My parents are both retired. My Mother, Helen, worked for QLD Health for many years. My Father, Damian, was a Chef. Damian represented Australian in Surf Life Saving (#99) and was State and National title holder in the 100m and 200m Butterfly in the late 60’s and early 70’s. My older brother, Hayden, swam for Australia as a Breaststroker, and now runs a real estate business on the Northside of Brisbane, while bringing up two little Flouch’s of his own. Hendrix and Savanah. My one and only sister, Abbey, a St Rita’s girl, works in the airline industry and has done so for 10 years. My twin brother, Joel, and youngest twin to me, works in accounts and also has two little Flouch’s of his own, August and Booker.

I guess my swimming career begun when I made my first team in 2002 for the World Cup in New York and Brazil. From there it snow-balled the following year when I made my first “A” Team for the World Swimming Championships in Barcelona, but not before heading straight to Indianapolis, USA for AUS Vs USA for ‘Duel in the pool’. I competed at the World SC Championships in 2004 in Indianapolis, where I won my ticket by winning the men’s 100 FS at the selection trials. 2006 was my last team at the Pan Pacific Championships in Vancouver. I retired from swimming in 2006 and didn’t touch the water again until 2010, where at the same time I began my Real Estate career until 2019. I’m now back in the swimming industry as a Masters swimmer and representative for Funky Trunks & Funkita for QLD, NSW and ASIA.

Have fun and live in the now.

Mind over matter. If you don’t mind the pain, it doesn’t matter.

To be the best you have to train the hardest.

Pain is temporary, glory is forever.

Start now. Its for all levels and ages. Swimming is a great way to start the day, and makes the rest of your day.

As an ex AUS athlete, I wish I knew about Masters before I retired. I would have competed in Masters rather than retiring. I think it would have helped the longevity of my career. It’s stress free and enjoyable. Masters swimming brings back the enjoyment in the sport.