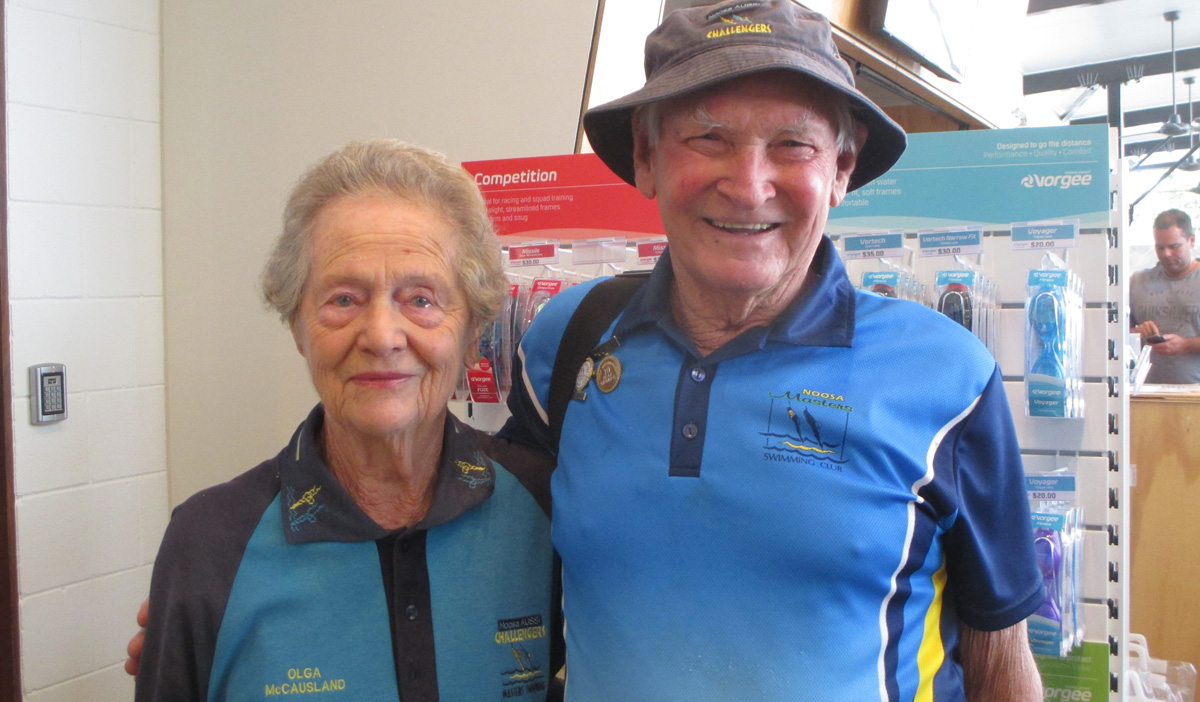 Sadly, Noosa Masters lost one of their dearly-loved life members, Olga McCausland, in September this year, after a short illness. Our sympathy to Olga’s husband Bob, and all their family and friends. She was a wonderful member of MSQ and will be sadly missed by all.

Olga Ruth Judd was born on 25 April 1932 in “Sweden” Private Hospital, Smithtown, Macleay River, New South Wales. She was the third child of seven, born to Oswald and Amy Judd. Her mother had to be rowed across the flooded Macleay River to get to the hospital in time for Olga’s birth. Olga lived on several dairy farms, Orama, Tyalgum and Piggabeen, one of which had a citrus orchard. She liked to help around the farm and on the rare occasion when her father was away, she was given the tricky task of tying up the back leg of the troublesome cows, ready for milking. Olga had a happy, country upbringing and attended the local school with other siblings, where her mother was the sole teacher.

After completing her education, Olga lived in a flat in Murwillumbah with her two sisters, Marie and Esma. She completed a Diploma in Commercial Studies at the Newton Business College. Olga and her sisters were all light on their feet and loved attending the local dances. However, it was at a 2lst birthday party in Fingal that she met her future husband Bob McCausland. He asked her would she let him drive her home from the party in his 1930 model DA Dodge Roadster. She accepted the lift, but to get to know her better, he had to persevere. Bob and Olga were married on 18 September, 1954 at St Andrews Presbyterian Church in Murwillumbah. The newly married couple went on to build a three bedroom brick veneer home together inYork Street, making all the concrete molded bricks by hand. The house is still there today! The family grew to include three children, Frances, Robert and Venetta. In 1964, they decided to move to Mackay for job prospects where Wendy was born in 1965.

During this time, Olga found work as a secretary for Ungerer’s timber company whilst Bob found work in the construction industry. Olga led a busy life bringing up four children and was involved in local church work, playing tennis and sewing for the family. She was an expert with a handline and the family spent many weekends catching black bream, whiting and flathead along the banks of Barnes Creek. The family also had numerous secret fishing spots around the Mackay and northern districts. Their family lifestyle has given her children life skills and the love of outdoor activities.

All the family hold fond memories of playing records, singing and dancing in the lounge room and viewing slide shows of their annual holiday, where they had visited relatives in New South Wales.

Olga learnt to swim at the age of 52 where she and Bob spent numerous years with the Mackay Masters Swimming Club. She was given a certificate to prove it, and when she swam her first 50m, she was rewarded with a chocolate frog from her coach! Olga and Bob went on to enter many carnivals together and obtained state titles in their age group.

There were many swims in Kinchant Dam, even in winter. Often local lifesavers trained there too. Every year the OWS swim for their carnival was held at the dam. Once around the lake was 3km. Some went around twice for 6km.

Bob recalled how the Hervey Bay Carnival used to include an OWS swim out at Keppel Island.  One year Olga won a ticket in the raffle for a free boat ride out to the Island but misplaced it and they had to pay the fare.  Too late … the missing ticket turned up!

Here listed are some of Olga’s Queensland State Record achievements:

One of her proudest achievements was earning a “Climbers Certificate” for climbing Mt Warning at the age of 70.

Bob and Olga moved to Tewantin on the Sunshine Coast to be closer to their children who had already moved into the area. Here, they re-established their swimming interest by joining the Noosa AUSSI Challengers Swim Club, now Noosa Masters Swimming Club and were awarded Hon. Life Membership. They often participated in time keeping for other aerobic swimmers. In 2003, with the Noosa AUSSI Challengers, Olga qualified as a member of the Zogg’s One Million Metres Club. She also participated in church choirs in Murwillumbah, Mackay and Noosa.

Olga had a passion for bushwalking and often went exploring in National Parks. She loved climbing mountains like Mount Cooroy, Pomona and Nindenberry, but her main feat was climbing Mount Warning on the 14th April, 2007. Her sister Pauline was also in tow. Olga spent many hours tending her beautiful garden and chasing bush turkeys away from it.

Olga was the most loving wife, compassionate mother and generous grandmother and great grandmother. She was the matriarch of her family and was always there, no matter how big or small the problem was. Olga was always approachable to talk things through and she had a wonderful sense of humour.

We will always hold her in our hearts as the Seasons roll by.