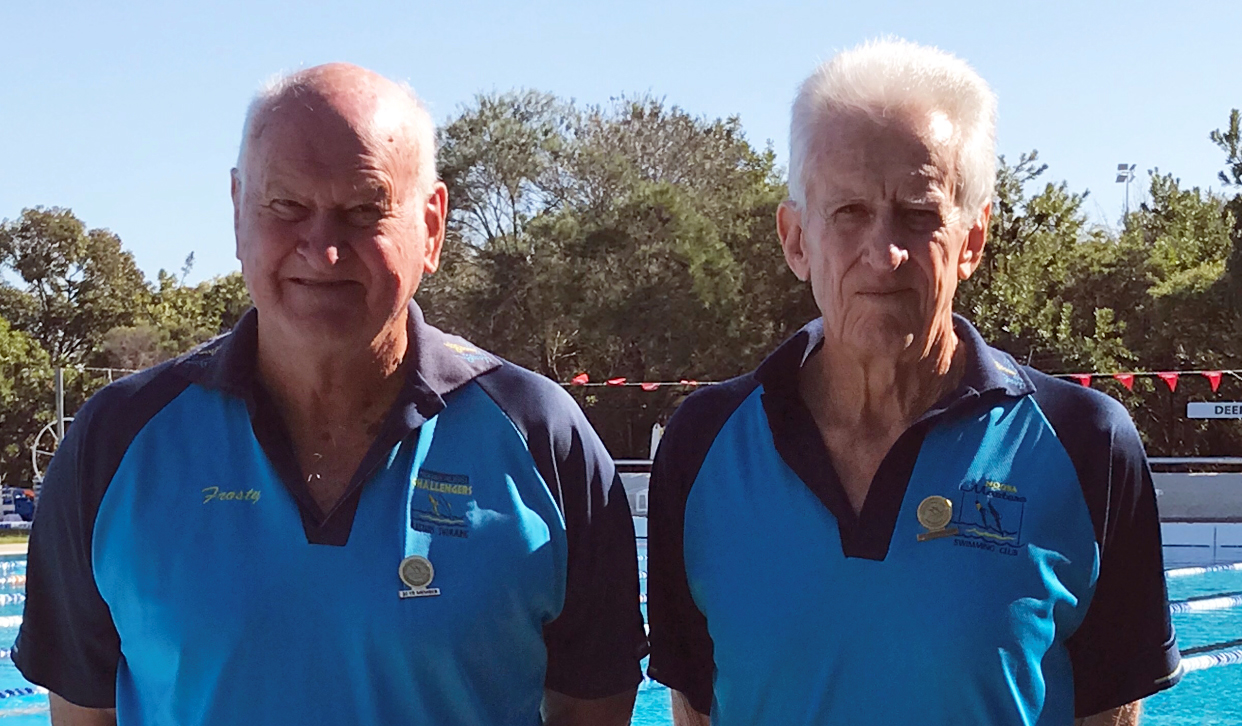 Congratulations to Tony Frost and Barrie Bedding on their 20 Year Memberships with QNA Noosa Masters.

Our Club was started at Tewantin School Pool in the early 90’s by two dedicated women, our founding members, Sandra Hudson and Janette Gemmel. With the help of other enthusiastic swimmers like Joe Gilbert and Bob Jarvis, they quickly built the numbers up to an impressive and competitive group of 30+ members. Barrie and Val Bedding joined the fledgling club in mid 1995 and have both been constant members up until last year when Val due to mobility issues, could not rejoin this year, but Barrie is again a member. In fact, with the exception of Joe Gilbert who was a constant member for 26 years, Val and Barrie are our longest constant members, Val for 24 years and Barrie now 25 years.

In mid 1999 the club moved to the new Noosa Aquatic Centre and Barrie and Val got straight into the work that the move required. Val along with Joyce Faunce selected the club colours and Barrie took up a position on the committee and took over the role of Aerobics recorder and organiser. Both Barrie and Val have been great supporters and contributors to our very successful aerobics program. When I first swam with the  club  Val and Barrie were an essential part of the organising committee and backbone of the club, along with Joyce Faunce, who became Secretary at the age of 80 years,  Joe Gilbert, Bob Jarvis and others. If  previous committees had decided to commence our membership badge recognition and year count from our club’s commencement at Noosa, both Val and Barrie would have already received their 20 year badge some time ago.

But today however, I am very pleased and proud to present Barrie with this 20 year club membership badge.

Tony’s passion with swimming started when, as an 8 year old, he joined Manly Amateur Swimming Club, where he remained a member for the next 10 years, swimming each Saturday & Sunday, during the season. Sprints on Saturdays, 55 & 110 yards. Distance swims on Sundays, 220, 440 & 880 yards.

In 1993, he was involved in the formation of Nippers at Sunshine Beach, taking up to 36 kids to Tewantin pool, sharing just two lanes. Tony thought this was simply crazy, hence a push for a 50 metre Olympic Pool, convincing Noosa Council through the Noosa Olympic Pool Asscn. (NOPA), that there was a community need for a 50 metre pool, with the Noosa Aquatic Centre opening on 1st May, 1999.

Noosa Mayor, Bob Abbott, threw out a challenge to Tony … ‘We are building you a 50 metre pool, what about a swimming club?’ Tony accepted the challenge and took on the Presidency of the Noosa Swimming Club for its first 3 years.

A Masters Swimming Club was formed a couple of months later, names NOOSA AUSSI CHALLENGERS (NAC). Tony joined as a member. He had been asked to join the Masters Swimmers at Tewantin, where they were a branch of the Sunshine Coast Masters, based at Cotton Tree ‘I will join when there is a 50 metre pool’.

Whilst never putting his hand up for a committee position, he had held a couple of positions: Publicity Officer for several years and assisting Wendy as editor of the Challenger Chatter for a few years. Tony is proud to say that he has been a member for what has been an amazing 20 years and he’s met some incredible people, including:

Spending 20 years as a member of the Noosa Masters Swimming Club has been special, also helping him to continue his love of swimming. And to top it off, Tony has just completed his 5 Million Metres, with the paperwork yet to be submitted. Congratulations Tony.