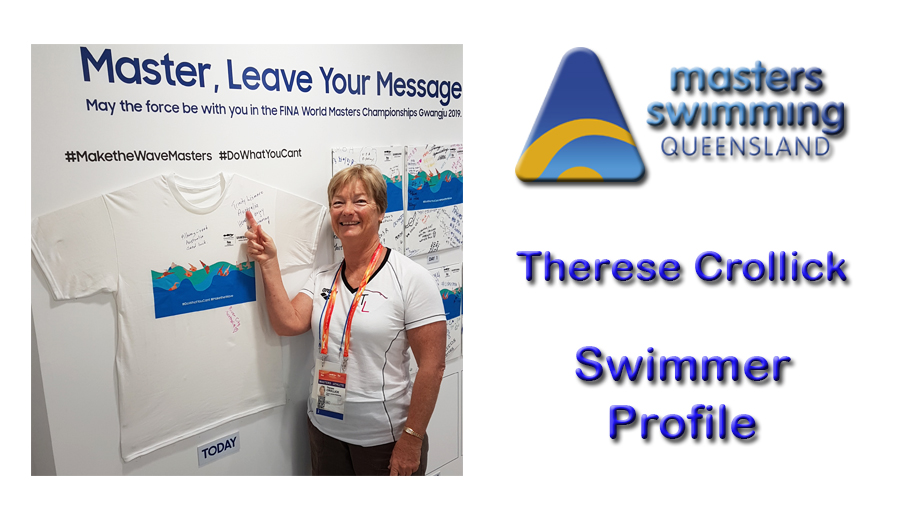 Thank you to Therese for her many years of dedicated service to MSQ.

I first became “involved” with swimming at about 3 years old, there is a lovely photo of me in the water with my Mum at Avoca Beach on the NSW Central Coast, me in my frilly cossie and frilly sun hat a big smile on my face learning to kick and dog paddle in the lake there, my family had regular holidays for some years at Avoca so I was exposed to the “open water” scene at a young age and it was also where I learnt to body surf as well. I did have formal swimming lessons when I was about 6 at Parramatta pool in Sydney and joined my first swimming club and squad training at 7 when a new pool was built in my suburb and friends of my parents were instrumental in starting up the swimming club there and encouraged them to join me up – the rest is history.

The feel of the water and the wonderful people I meet in swim squads and at swim meets.

November 1984 I joined Summerland AUSSI Masters which was based at Alstonville pool and was a NSW club.

Lots of memorable moments hard to pick one but probably the Open Water swim Bronze medal at the World Masters Games in Auckland in 2017 – the water was freezing, I’d had to have treatment in the previous days for shoulder tendonitis which wasn’t 100% fixed but I did it and to come 3rd was just amazing.

4 -5 times per week: x3 with the junior/Masters squad at Trinity pool in Lismore, x1 at Alstonville pool with the adult squad and usually x1 ocean/surf swim at one of the  Ballina beaches.

Favourite things: a chilled glass of wine with some cheese and olives on a summers evening and travelling to new places anywhere in the world.

Hopefully Pan Pacs and then Nationals next year.

Just one brother who also swims and is a keen cyclist and of course my house companion Charlie who is a champion dog paddler but is now entering his twilight years so isn’t quite so active anymore.

Mum and Dad were both active – Dad cycled and liked swimming and bush-walking and Mum swam, played tennis and netball.

I am a retired Medical Scientist, my specialities were Haematology and Transfusion Medicine.

I now teach Learn-to-Swim at Trinity college pool in Lismore.

I have won NSW State medals for Synchronised Swimming.

I play the clarinet and am a member of the Ballina Shire Concert Band.

I have been the NSW Chief Instructor and Chief Examiner for Royal Lifesaving Australia.

I was a member of the NSW State Royal Life Saving Team 3 times and Team Coach in 1983.

And something else not many people know is that I’m an historic car enthusiast and I own a 1974 MGB Roadster and it’s red – of course!

If you’re going to do something, do it to the best of your ability.

Life is too short to sweat the small stuff.

Just Do It – wonderful way to motivate yourself to keep fit. You’ll meet great people and if you want an excuse to travel, this is it!