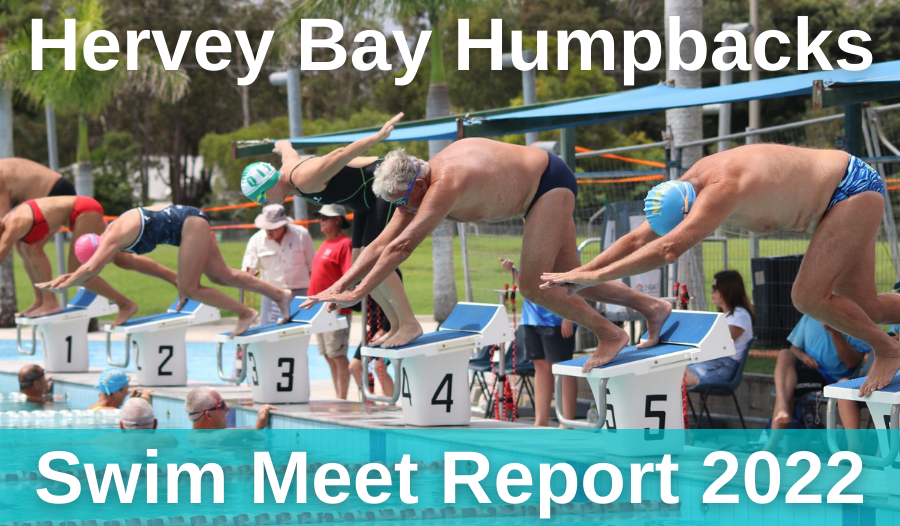 Saturday 12th March began early for some of the Humpbacks – Meet Director Pete was up and at it as the sun rose.  The Humpbacks began arriving to assist in setting up and helping wherever they could.  It was all hands on deck.

As the early morning progressed, the competitors from various clubs began arriving with their banners and marquees to set up for the days’ events. Some took to the pool – warming up in readiness for the first of the events, making the Hervey Bay Aquatic Centre a hive of activity that not only had 113 competitors from 23 clubs, but the public were given a treat watching the beginning of competition.

Adrian Tantari MP, Member for Hervey Bay arrived for the official opening of the Meet along with Jarmo Havela from our naming rights sponsor. Both were thrilled to see the number of clubs who made the journey to compete.

The competition was quite fierce with PBs achieved in many events, with the pool temperature being 28 degrees Celsius.  All strokes were hotly contended in all age groups.  There were a few very tight times as two or three competitors battled it out in the last metres for the win.  It is wonderful to see that no matter where you come in the race, we all give our congratulations to our fellow competitors even when it’s through gasping breaths.

The men’s Dash for Cash was fought hard as there were three very determined men who gave it their all.  Everyone was up on their feet barracking and urging the guys on.  Very exciting to watch.  It was a good race won by Todd Robinson of Southport Masters.

Next up was the women’s Dash for Cash.  All eight lanes were taken, as the race took off everyone was up and even closer to the pool’s edge barracking and cheering the ladies in the quest to be first.  The excitement of the ladies racing and everyone up yelling and cheering gave the general public the message that you are never too old to swim, have fun and compete. An extremely close finish with Nola Macaulay from UQ just edging ahead for the win.

The last events of the day were the relays.  The relays are always exciting events between clubs, with a mixed medley event followed by the mixed freestyle relays.  The banter and cheering are taken to a new level with the teams battling it out to be the best.

Meets such as ours would not be possible without our MSQ officials, and we thank Colin Carter, Terry Major, Michelle Burley-Jones, and Liz Alfredson for travelling to Hervey Bay to assist. Thanks must also go to MSQ Director of Recording Martin Banks, and MSQ Administrator Christina Scolaro, for all their assistance and advice during the planning process. We also thank President Cheryl Brodribb, for running a well-attended Starters course on Friday evening, and then assisting wherever needed throughout the day, and VP Central Patricia for her assistance as Chief Timekeeper.

At the end of the meet while everyone was packing up, the officials in the hut were busy doing the calculations of the days’ events.  Cash prizes for the Dash for Cash and the “closest to nominated time” events were presented at the pool.  Swimmers then headed  back to their respective accommodation to prepare for an evening of fun and the presentation of awards and trophies.

The evenings’ theme was FIESTA, and it was great to see people arriving strutting their look.

All looked more relaxed if not just a little weary from the day.  The evening also provided the time to catch up and have some fun with fellow club members.  A grazing table was enjoyed along with a few drinks and lots of laughs arising from our entertainment, stand-up comedian, Patricia!

As the evening came to an end, the looks on everyone’s faces  reflected the success of the day.

Sunday morning saw many of the visiting swimmers taking advantage of the attractions of Hervey Bay with day cruises, visits to K’Gari (Fraser Island) or joining the Humpbacks for brunch at our sponsor Café Balaena.

Our thanks to all,