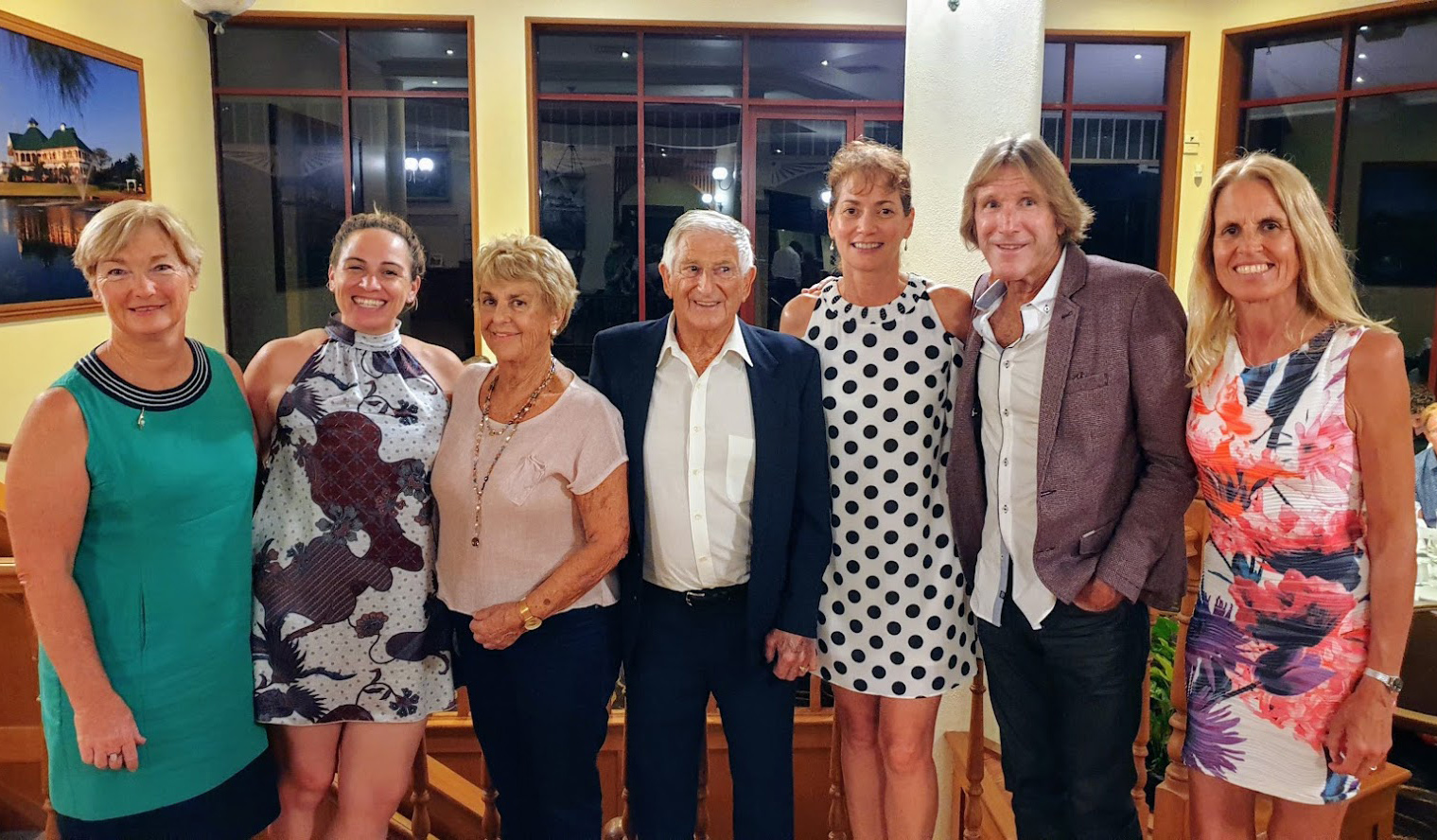 QMM Miami Masters have celebrated the long and outstanding swimming careers of two of their legends – Denise Robertson and John Crisp – with a special ‘Icons of Swimming’ Dinner. It was a wonderful way to honour these swimmers, and to celebrate their impressive achievements over many years. Thank you to Miami Masters for hosting this event, and to Denis Cotterell for attending as guest speaker.

Both swimmers now enter the new age group of 85-89, and we wish them every success into the future.

Following a promising career as a youngster, swimming briefly with Forbes Carlile in Sydney, Denise returned to competitive swimming in 2001 joining Miami Masters. After her first State Titles in Townsville in the 2000s where she was reacquainted with the swimming lifestyle she was hooked. Denise is a regular trainer and is an inspiration to many other swimmers through her amazing example in training and in competition. She currently holds one world record from 2016 for the 1500m Freestyle, 19 short and long course national records dating from 2010 to 2019 and 32 state rec-ords dating from 2005 to 2018.

Denise works tirelessly for the Miami Masters Club and has taken on many roles such as Secretary from 2001 to 2006, President from 2006 to 2009, Vice-Captain from 2009 until 2011 and from 2011 to the present, she has held the role of Recorder. Denise has also been Meet Director on a few occasions. Denise is very active in all aspects of the Club’s activities, willingly volunteering to take on roles and assist with the variety of jobs that need to be done. She rarely misses a Committee meeting and she is selfless in sharing her deep knowledge of masters swimming and the Miami Masters Club.

Denise has been a Life member of Miami Masters since 2013 and is a remarkable example of a “Swimming Icon”.

After a successful career in diving and surf swimming as well as other sports, John Crisp joined Miami Masters in 1988. For most of his masters swimming career John has been an avid trainer combining a rigorous exercise program with demanding pool sessions.

Over his long career, John has broken many state and national records and currently holds 17 long and short course national records dating from 2005 to 2015 and 60 state records dating from 1995 to 2016. John currently has 8 en-tries in the FINA World Masters “Top Ten Fastest Swims of All Time”: the high-est ranking being 3rd in the 1500 Freestyle long course event in the 75-79 age group.

John has been great contributor to the Miami Masters Club holding many positions over the years including Aerobics Director from 1988 to 1989, Vice-President from 1991 to 1992, and from 1996 to 2011 he was Captain and Vice-Captain.

John has very actively encouraged and supported many swimmers as they return to or take up the sport as masters athletes. John is an expert in the science of swimming, and he gives back to the sport through advice to the Coaches on programmes, and often runs specialist master classes to help members improve their skills.

John has been a Life Member of Miami Masters since 2006 and is the epitome of a “Swimming Icon”.

As icons, you have been proclaimed.

A holy painting you are not,

Nor symbols on computer screens;

You are revered and idolised,

Most worthy of recognition

You both hold a status that’s prized.

How did you reach this pinnacle?

Behind you a victory trail.

But more than just the accolades,

We could not have asked for more.

You have both been made life members,

Of our Masters Swimming Club,

In recognition of service;

Constant presence at the hub.

Your feats are awe inspiring,

To those who struggle the black line.

You search for swimmers with years;

Been on the committee for years,

You are respected by your peers.

John, you have served as our captain

And smoothed out our faults as a coach.

With a professional approach.

Denise and John, we’re proud of you

And wish you all the very best.

There are records still for you to crack

That may put you to the test.

We thank you both for giving much,

Thanks for being a part of our team.

A Day with a Difference
Thelma Bryan OAM