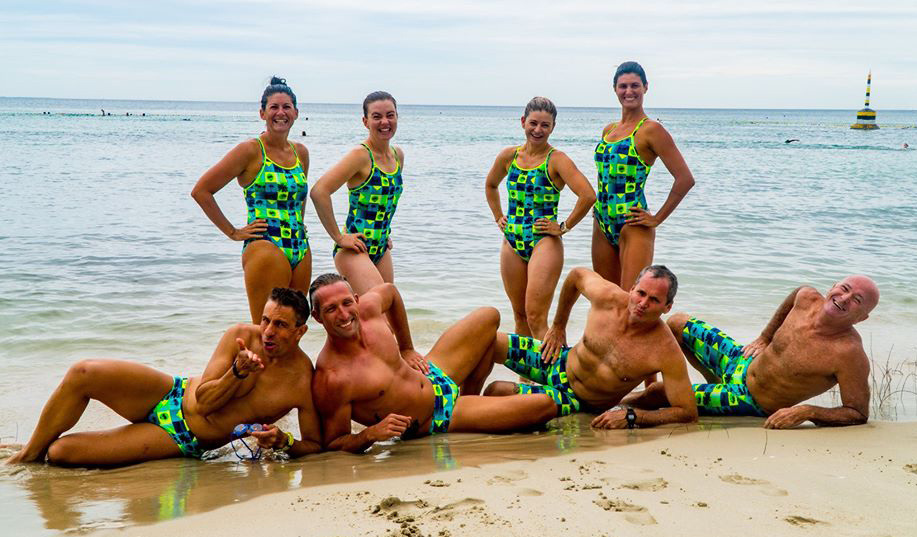 It’s really hard to express how I feel about managing to complete this event.   Firstly though, thanks again MSQ for putting on the Lake Barrine Qualifier.  There are a lot of logistics in getting to do this swim, and having a local qualifier was one thing that made me start thinking seriously about giving this a crack.

The whole event was magic, from start to finish.   From looking out to sea at the start and thinking it looked like Hong Kong at night from all the lights on support boats, to the swell that had my paddler and many other swimmers and supports puking their guts up, down to the stingrays that swam towards the finish with me for the last few hundred metres.  I know I signed up for a solo event, but it was a huge team effort for me to be put in the privileged position of being a part of this.   Not just the amazing support people I had on the day – but also my family, training buddies, coach, swimming friends and numerous people who inspired me to give it a burl.

I loved every second.  There was so much to look at – the ocean floor was visible the whole way across – and there were boats and paddlers all decked out in flags and colourful outfits.  Teams would pass through, and they all looked like they were having a ball.   I saw jellyfish that were pink and absolutely beautiful, and thanks to moves like a ninja – I managed to avoid them.  Others jellies though, I didn’t see until they’d slapped me in the face or arms.  The water temp was uncomfortably cold for a North Queenslander at 23 degrees, but once the heat of the sun came through the clouds at about the 3/4 mark and hit my back, it got better, and I could stop being concerned with hypothermia.

I met so many swimmers, from all over the place, from all works of life, and heard so many inspirational stories.  It was an incredible feeling to walk down to Cottesloe Beach each morning and look out on the throngs of swimmers training for the weekend.

I feel really, really privileged to have had everything fall into place in the lead-up and on the day and to have been lucky enough to have completed the swim.

Our men’s team (Cairns Team Elite) featured Edwy Bunt, Ed Lukin, Adriano Schonenberger and Craig Needham (Cairns Clams). In difficult conditions, the team crossed the channel in the swift time of 5 hrs 50 mins, which was good enough to place 6th from 59 teams in the male division.

Congratulations to all our swimmers who participated. The swimmers wish to thank Gareth Sykes and @teamelitemerchandise swimwear for their support.

The Rottnest Channel swim is the largest open water swimming event in the world.  The 2020 event attracted close to 2500 swimmers, representing 16 countries, with the eldest swimmer of 75 years and the average age 34.   Being able to see the ocean floor for the entire 19.7km crossing is a unique feature for an ocean swim and the crystal-clear water shifted thoughts away from the possibility of large marine life gate crashing their day and onto the beauty below.

For Sarah, mother of three and primary school teacher, the event was best described as ‘brutal but rewarding’.  Overcast conditions and 23-degree water temperature were ideal for ocean swimming but the non-tropical stingers thought the same.

Theresa Donnelly, Team Captain & Coach led the team off from Cottesloe Beach and within 200m was lashed across the face by an unseen tentacle.    With the support paddler in her sights, she continued to the 1500m mark where the first changeover occurred, and she was able to douse her face with hot water to alleviate the pain.  By the 3km mark all team members had experienced the stingers.  Thankfully the team was equipped with stinger suits to lessen the impact.

Michelle Caffrey battled sea sickness despite taking all the necessary precautions in the lead up.  Fuel fumes from the 300+ supporter boats conversing the course worsened the impact.   Narrowly avoiding a skipper’s call to medivac, her to shore, Michelle only sat out one 10-minute rotation.  When asked what got her through, she revealed ‘power napping, Endura and the thought of hot chips ashore’.

Jo Maher used the event to raise awareness and funds for the Garvan Institute of Medical Research into Pancreatic Cancer.  It’s a cause that is significant for the team as every team member has lost a family member or friend to the disease.    Jo loved every aspect of the event. On arriving at Rottnest Island, she felt as though she could have turned around and swum back to Cottesloe.

The team reached Rottnest Island in 7 hours 18 minutes and finished 6th in the Female 150+ Group.   Their crossing attempt would not be possible without a support crew.  Perth based paddler Charles and skipper Peter kept the team safe and as straight as a ruler (confirmed later by the event GPS tracker), despite a strong cross current at the 15km mark.   Sarah best surmised the benefits of participating in the event as a team, ‘….working towards a common goal, pushing physical boundaries and cementing new friendships.  The ladies are only too happy to share their experiences further with anyone considering the event in future years.

After doing the Rottnest Island swim for the very first time last year as a duo with my sister, I went back again and did the swim in a team of 4 this year. I was a bit apprehensive because even though last year’s swim was a great experience and very rewarding, I still remembered the not so good bits. The whole crew last year were nothing short of outstanding and that’s probably the thing that got me back. The Rotto team this year was my sister Allison, and her friends Em and Nat who are all masters swimmers and accomplished open water swimmers. We were in the F 150+ category. A very long day, but it was fun with lots of laughs along the way. My team mates and crew kept telling me it was fun before hand (can’t say I believed them at the time…). Up at 3am to get on the boat and to the starting position before the solos started, even though our wave didn’t leave til 7.20. It was raining when we set out in the boat, and the water was relatively flat.

The water wasn’t as cold as last year, thank God, but it was still a bit uncomfortable compared to what it’s been at home. There was a pretty strong current this year, so times were not fast, but James (skipper) kept us on a perfect course. It did get a bit lumpier closer to the end, but not too bad. The water was clear and we could see the bottom of the ocean for the entire crossing. Nat managed to see a stingray, but the rest of us only saw a few fish. One solo swimmer we knew saw 15 stingrays in her crossing, wow!!! We all got stung (grrr!), but that wasn’t as bad as last year either. I didn’t get sick (hallelujah!!) so it was a much much better experience overall! I was so relieved pretty damn happy at the end!! We got first in our category, and fourth female team overall. Very happy with that.

I’m in awe of the swimmers who do this solo, such an amazing achievement! Congratulations to you all!!! We had the absolute best crew, everyone was brilliant!! Chantel, Erica, Kadin, Troy and James were our crew and kept everything ticking over perfectly and caring for us swimmers so we only had to worry about actually swimming. They were superb – thank you!