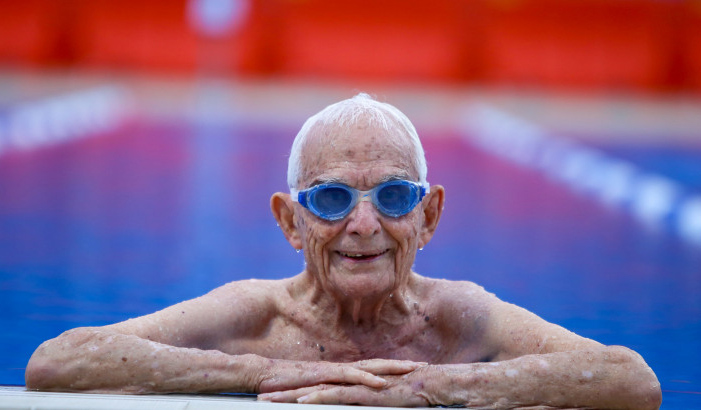 MSQ farewells a legend of Masters Swimming and a wonderful gentleman who was special to so many.

George Corones, long-time member of QTT Twin Towns Masters Swimming Club, sadly passed away on 22nd March 2020. He left us peacefully and of sound mind, only a few weeks short of his 102nd birthday. George was such an inspiration to us all, and his stories of life and passion for our community will always be remembered.

George Corones was born 6 April 1918 in Charleville, Queensland. At this time, the life expectancy of a male was 48 years.

George quickly developed a life-long love of sport. He loved to compete and win, and this desire was an essential aspect of his character. From a very early age he proved to be a natural athlete. From seven years of age, George competed in his primary school swimming carnivals. He won a gold medal in backstroke over 33 1/3 yards. At Toowoomba Grammar in the 1930s he played in the First 15 Rugby Team, and the First 11 Cricket Team. He was also a member of the school swimming and athletics teams. From 1937-39, George was selected to play in the University of Queensland’s A grade cricket team as opening batsman and wicket keeper.

George enrolled at the University of Queensland to study medicine in 1938. With the outbreak of World War 2 hostilities, all the medical students were conscripted to the university regiment based near Chermside. There they trained alongside other army units, but they were not considered as proper servicemen as they continued to study. In his third year of studies, George wanted to take a more active role and enlisted in the RAAF. He was however, directed instead to complete his medical studies.

George graduated in 1944, completed his term as a resident medical officer at the Royal Brisbane Hospital, and was then transferred to the Atherton Hospital west of Cairns, into the war zone. When peace was finally declared, George was directed by the government to stay in North Queensland and take up the position of Medical Superintendent at the Mossman Hospital.

George returned to Brisbane in 1949, where he took over a medical practice in Chermside.  Here he spent much of his time in his car, visiting patients. Later he established the North Brisbane Clinic on Gympie Road, Kedron. This was one of the first group medical practices in Brisbane. Unlike the typical General Practitioner of today, at that time they were expected to perform various medical procedures, now reserved for specialists, such as tonsillectomies, appendectomies and some obstetric procedures including delivering babies and the associated anti-natal and post-natal care.

“What you work for, and fought for, you value,” he was fond of telling his family.

In 1948, George began horse racing, acquiring his first thoroughbred which went on to win a total of thirteen races, some at the Eagle Farm and Doomben Racecourses. Towards the end of his working life, George took up Lawn Bowls joining the Clayfield Bowls Club, and playing competition bowls every Saturday.

George retired from his long and productive medical career in 1998 at the age of 80. He met up with another swimmer from Twin Towns Masters Swimming Club (QTT) called Arthur Thomas. Arthur persuaded George to join QTT, and George was loyal to this club for over twenty years. Both George and Arthur travelled the world together to masters’ swim meets, and between them broke many records.

George lived in Albany Creek, Brisbane, and trained regularly at the Albany Creek Leisure Centre. George would train by swimming laps three days per week. He would also go to the gym or do three kilometre brisk walks two days per week. His favourite strokes were freestyle and breaststroke. His backstroke was inhibited by a sore left shoulder leftover from an old rugby injury.

The highlight of his sporting life came in 2018 at the Australian Swimming Trials to select the team for the Commonwealth Games. At these trials held at the Gold Coast Aquatic Centre, Queensland, Australia, on 28 February 2018, Corones swam 50 metres freestyle in 56.12 seconds, breaking the previous record for 100-104 year olds by 35 seconds, taking the record from Britain’s John Harrison who had set a 1:31.19 mark in 2014. He also set the world record for the 100 metre freestyle in 2:24.21 at the same swim meet, on 3 March 2018. He entered the trials as National and Queensland state record holder for five events – the 25, 50 and 100 metres freestyle and 25 and 50 metres breaststroke – having set those records the previous January. He was officially inducted into the 2018 Australian Commonwealth Games team as the oldest member ever.

George credits his longevity to the wonderful exercise that swimming is.

He was known to tell others:

“Swimming is the only activity that the human can indulge in that is gravity-free. You realise gravity incessantly is putting a strain on us. You can’t escape gravity even if you’re sitting down – you’re probably in a bad posture and your muscles and ligaments are aching because of it – but swimming gives you that opportunity.”

“In the water you’re weightless. While you’re there, you can use all the muscles in your body, your sinews and elastic tissues, without that extra weight that’s on you. In the water, it’s just yourself and no weight at all. If you don’t use it, it just goes away,” he said of keeping active.

Over and above his work ethic and love of sport, one of George’s finest qualities was his moral character and his love of family. He was loyal to his family, friends, colleagues and patients, and was devoted to Thelma, his wife of almost 75 years, and their five children. Another aspect of his moral character was his honesty and integrity in all his dealings with others. He always honoured his commitments and took responsibility for his actions. He had his own set of values and he stuck by them. George could always be relied upon. He was a quiet achiever, kind, considerate and generous. He was respected and held in high esteem by all.

He was physically active until the end of his long life. He remained mentally alert, still managing his share portfolio and keeping up with market trends until the last weeks of his life. He felt satisfied that he had always worked hard, done the right thing, and made the most of all opportunities presented to him.

“Tell it as it is. If you don’t do it, it will not be done. Nobody else can do it for you. Do today at least what you did yesterday. Doing less is a step backwards. Take charge of yourself.”

“Map out a value program, physical and mental. Generate your adaption processes progressively. Abandon disuse atrophy and the rewards are astronomical.”

George was such an inspiration to young and old and he will be missed by all those who were privileged to have known him. To George’s wife Thelma, their four sons, Harry, Peter, Mark and Stephen, daughter Georgia, 14 grandchildren, 14 great-grandchildren with three more on the way, MSQ offers heartfelt condolences as they say goodbye to a wonderful gentleman who was special to so many. Vale George Corones 1918 – 2020.