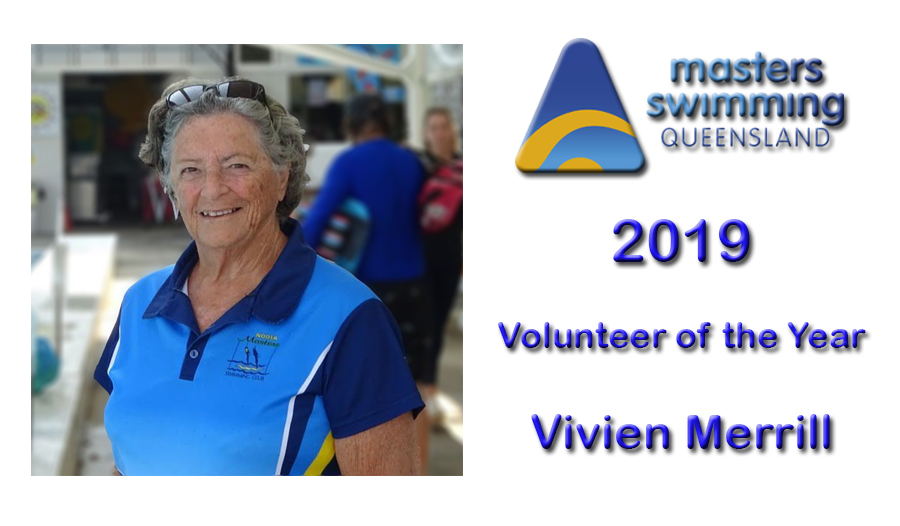 MSQ 2019 Volunteer of the Year

Vivien Merrill of QNA Noosa Masters, takes out the award for 2019.

Masters Swimming Queensland is proud to announce that Vivien Merrill of QNA Noosa Masters, has been voted as the MSQ 2019 Volunteer of the Year. Congratulations Viv, and sincere thanks for the time and effort you cheerfully give to the Masters Swimming community.

Vivien Merrill is one of five Masters Coaches for QNA at the Noosa Aquatic Centre. Over her 30 years of competitive swimming and involvement in the sport, Viv is still a competitive swimmer, Queensland Technical Official and Masters Swim Coach.

Viv has been an active member of Noosa Masters Swimming since 2012.  During the 2019 year Viv has actively contributed to QNA in numerous roles.  She is on the committee as the Club Treasurer (fourth consecutive year), as a club coach and as a technical official. As Treasurer, Viv has streamlined the club accounts and worked with an auditor to ensure that correct procedures have been followed.  As club coach, Viv volunteers one Sunday each month and assists on a Thursday morning when requested.

“Seeing improvements in swimmers after providing some stroke correction gives me great satisfaction.”

QNA volunteers at several events each year such as the Noosa Triathlon and the Run Swim Run.  Viv selflessly gives her time to support these initiatives in addition to her official roles.  Throughout 2019 QNA has also undertaken several Bunnings BBQs as fundraising activities and Viv is also part of the BBQ squad. The QNA committee wholeheartedly support this nomination for Volunteer of the Year 2019 and feel that Viv Merrill has supported both MSQ and Noosa Masters above and beyond the call of duty.

An interview with Viv

As a 13 year old immigrant from Wales, unable to swim, my parents enrolled me in a Learn to Swim Campaign in Wollongong.

The feeling of weightlessness while in the water, the freedom of swimming in the ocean, and the fun of competing against women in your age group.

Living in Noosa, I swim almost every day- 3 days in pool, 3 days in ocean, one day recovery.

I love being a swimming coach, able to pass on my knowledge to others.

No. I’ve been pretty swim healthy.

With arthritis in my knee, walking is not my favourite pastime, however, put an overseas trip in front of me with some walking and I will do it. I Love to travel – wanted to be an airhostess when I was younger.

Whatever event is available after this COVID 19 shut down is lifted.

Returned to study as a 60 year old and completed a Master of Sport Business. Sometimes I was older than the lecturers!

Prior to getting my Masters of Sport Business, I was an accountant with a love of sport. Having the qualifications behind me, I have worked for Women’s Golf Victoria, Masters Swimming Australia and my last position was with Boxing Australia. I came to appreciate the hard work and dedication that amateur boxers have to achieve to get to the Commonwealth and Olympic Games, and was in the sport when women boxers were given the right to box in those Games.

Give everything a go.

Masters swimming provides a basis for your exercise, social calendar, community spirit and your ability to surprise yourself.

Many thanks to Noosa Masters for submitting Vivien’s nomination for this award.